BORROR creativity reaches beyond amazing places to live, they display their artistry through their yearly team holiday celebration, and with this year being their 10th year in business, the party did not disappoint.

Over the past 10 years, the BORROR team has celebrated the end of the year in many ways as they have continued to grow their team. From the year of the “Holiday Holiday Party” celebrating every holiday to when “BORROR Turned the Short North Upside Down” by hanging Christmas trees from the rafters and painting upside-down arches on the walls of an empty warehouse. 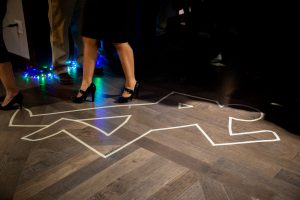 Given that 2018 was a big year for BORROR, they knew they needed an equally amazing holiday party in their new offices at 985 High. When BORROR President, Lori Steiner, came up with the idea of a murder mystery, she knew she had found the perfect theme. Working closely with the team at The Dinner Detective, they dreamed up the perfect murder.

The victim was an easy choice; CEO and visionary Doug Borror was the perfect target with his fun-loving personality and anything-but-amateur acting skills. This fun and energetic dinner-theatre event started with Doug entering the party with a faux-knife held to his chest, post-“stabbing”, and landing in the middle of a tape-outlined body on the floor. The audience was a mixture of awe and giggles from the show when the detectives came out. The rest of the story was up to the actors from The Dinner Detective, some of whom blended in as new BORROR employees, while others worked the case as detectives. 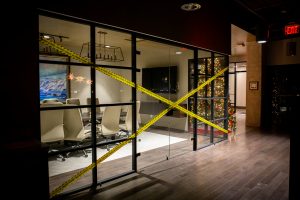 Longtime caterer and friend, Mary Beth Zakany, helped the party come to life with caution tape décor, Clue® themed table names, and her amazing food. She even supplied the perfect disguise for the murderer, one of her server’s chef coats.

As always, the BORROR team had a great time. BORROR is proud to give a special night back to its team to celebrate the team’s hard work in 2018.

To commemorate our 10 years, we wanted to share 10 years of holiday festivities;

2010 – The Team Goes Caroling in their future office

2012 – Celebrating the Holidays with Holidays

2014 – Turning the Short North Upside Down

2017 – It’s Going to Get Ugly with Ugly Holiday Sweaters

Developments feature spacious, flexible floor plans and high-speed internet access Having the capability to work from home has never been more important, and an apartment optimized for working from home is poised to become the latest must-have...

2019 was another great year for Borror! We celebrated a year at our expanded headquarters in the Short North, opened a celebrated new development in Italian Village, and continued to lease our high-end apartments in Columbus’ most...

2019 was an exciting year for BORROR. We remain committed to offering life better lived and the best downtown living experience to our residents. Take a look back with us at a few of our highlights from...